Showing posts from February, 2019
Show all

The Developer - A modern fairy tale

February 15, 2019
Adam couldn't remember his childhood. His memory was completely erased. Or maybe just blocked. Anyway, he couldn't think of anything whenever he tried to think of what might have happened before waking up for the first time in his bed here in the three by three squaremetre cell where he had spent his whole life ever since. His cell had natural light, but the window was so high that he couldn't see out. Apart from that there was a desk with computer, a treadmill and a slit in the cell besides the bed. When Adam first woke up in his bed in that cell, he hadn't found his way for a moment, but that moment had been shortlived. For the computer turned on and a voice sounded that said to Adam, "Welcome! You are Adam and will now be trained by me to be a software developer." Curiously, Adam sat down at his desk and followed the instructions given to him by the voice. The computer taught him, Adam, how to develop programs. Adam enjoyed this job very much. He soon came
Post a Comment
Read more 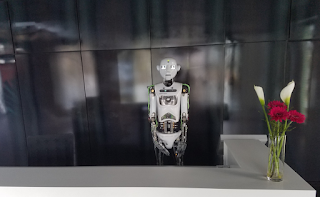 Demobit 2019 was a demoparty in Bratislava, Slovakia, beginning of February 2019. This event is held on an annual basis since 2017. Before that, there were events in the time period 1995 to 2001 when the main organizer of the event, Zden Hlinka, was still a high school student. In 2001 to 2017 he was focusing on his career and finally he has felt nostalgic about the old memories of the demoscene and therefore decided to resurrect the party.  Such events are held at various places, mostly in Europe, throughout the year. People, often from abroad, gather there to participate in creative computing competitions: graphics, music, animations, demos, intros, these are the categories which are to be found at any demoparty. At Demobit 2019, I participated in the photo competition, the 256 byte intro competition and the "one scene" competition (a competition for demos with a restricted execution time of one minute). The location of the event was the Binarium, a site where several IT-re
Post a Comment
Read more

February 15, 2019
Welcome to the fourth issue of Prudentia Journal!  Again, it is only a month since the previous issue, and again, it is for a reason: There was a computer art festival called Demobit in Bratislava, Slovakia, in early February 2019. This issue of Prudentia Journal is mostly dedicated to this event, and it features a photo report. That is why the PDF file has grown pretty big – I hope this is okay with you, hopefully most of you already have a broadband Internet connection.  In addition, I have included a modern "fairy tale" about a software developer. Just think that life might be like this for some of us in the near future! What do you think about this? I would be curious in your reactions!  Enjoy reading!  Claus Volko, cdvolko (at) gmail (dot) com
Post a Comment
Read more
More posts